A jetty at last!

Before the jetty, 1905. Newly built Hotel Cottesloe behind on dunes. (Grove Library CPM00113)

In the Cottesloe Roads Board approached the State Government with a request to build a sea jetty.

It took another six years to decide if it should be built at Beach Street or Forrest Street. In the meantime, the Board built shelter sheds on the edge of the beach and leased stalls for the sale of tea, coffee and refreshments. On hot summer days crowds flocked to the beach by train.

The Hotel Cottesloe, prominent in the picture above, opened in on the corner of John Street and Swanbourne Terrace (now Marine Parade). The two-storey wooden building faced south with high sand dunes rising behind. The Daily News advertised the Medoras-Jeffrey Pierrots as the upcoming “Summer evening’s amusement by the sea.” [1] Trove: Daily News, 21 October 1904, p6.

Construction of the jetty began in , mostly funded by the State Government with a contribution by the Cottesloe Roads Board. By the end of the year the jetty was open to promenaders and fishermen. Over 11,000 people took the train to Cottesloe on Boxing Day 1906.

The image below shows the newly completed jetty with the band stand ready and waiting for brass band concerts. 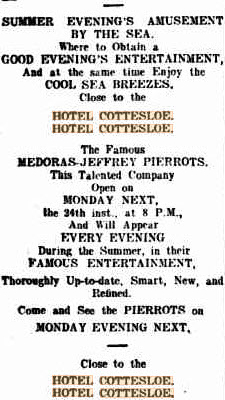