You are here: Home1 / Waves of Change2 / 1909 Sandcastles and greasy pigs
Previous

With the opening of the jetty the pressure was on for the new Cottesloe Municipality to provide comfort and entertainment for the crowds.

Mayor Stuart approached the State Government for support noting that Cottesloe had “spent much money in the erection of latrines. Their sanitary bill had been very large.”

For many, a day at the beach was more about promenading and picnicking than bathing. Bands played in the rotunda on the jetty and stalls on the beach offered entertainment. In March 1909 the council put on a “monster children’s carnival” which included sandcastle competitions, a race to catch a greasy pig and a duck hunt!

Bathing costumes were strictly regulated and bathers had to be clothed in “serge, flannel or flannelette extending from the shoulders to the knees”.

Mixed bathing was allowed and in fact encouraged by Sergeant Smith of the Royal Life Saving Society. As he proclaimed at a meeting in Bunbury:

“The Society he represented did not opposed mixed bathing, but (on the contrary), advocated it, believing that the practice was more to be commended than condemned. At Cottesloe and Rottnest and other metropolitan bathing centres the ladies were by no means ashamed to join with members of the opposite sex in the water, and many of the ladies were enthusiastic members of the Society taking a prominent part in the works and regularly attending drills.” [1]Trove: Bunbury Herald, February 11 1913, p1.

Dressing sheds were constructed on the beach but one “Lady Bather” found the trek from the dressing shed to the water confronting:

“There are several men (?) who have recently made such a practice of staring at ladies when in their bathing costumes that they will shortly find themselves let in for a good ducking unless they desist from this pernicious habit.” [2]Trove: Sunday Times, 2 January 1909, p8. 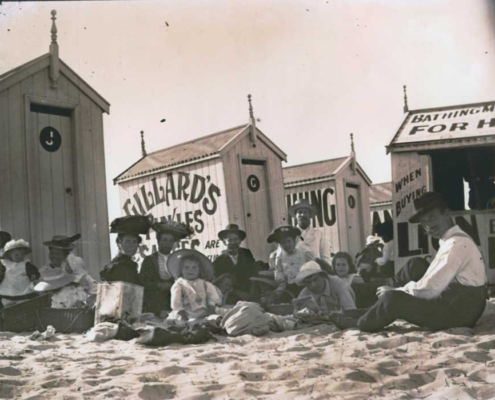 For those who could afford it, Mr Page hired out bathing machines which could be wheeled to the water’s edge for the swimmer to emerge in some degree of privacy. They were hired out for an hour at a time and, at the end of the day, drawn back up the beach by a horse.